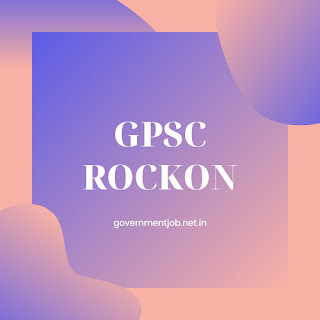 GPSC Rockon is the Facebook group Which Stand for how to do preparation of GPSC and how to crack gpsc and some motivational speeches are also available at this group.GPSC rockon is and facebook public group so you can join easily. If you are doing preparation of gpsc then must join gpsc rockon group. if you have any query about the competitive exam you can on that group they must help you.

The Gujarat Public Service Commission (GPSC) was formed under article 315 in the Constitution of India on 1 May 1960. To select candidates for civil service jobs in the Indian state of Gujarat according to the merits of the candidates.GPSC has its own twitter handle so you can follow its twitter. gpsc rockon and official twitter hadle  publish new recruitment, results and all kind of latest update and news at twitter A chairman and members of GPSC can stay on their position till 6 years or 62 years..in both of them which is early. Now Dinesh Dasa is the current chairman of GPSC.

In the year 2020, GPSC will conduct the exams for the following posts.


A total of 1466 vacancies are available under GPSC Recruitment 2020. GPSC online applications are available on GPSC official website www.gpsc.gujarat.gov.in.

EMAIL NEWSLETTER$desc=Subscribe to receive inspiration, ideas, and news in your inbox